Getting a tattoo is probably the most terrifying and exciting experience of my life. For years now I’ve wanted this tattoo and I was super excited to get this and I’ve been anticipating it for years. In this post I’m going to be explaining my experience of getting the tattoo and the meaning behind it etc, I’m also going to be answering any questions you may have. I know tattoo’s can be such a hit or miss so I thought I would do a poll on my twitter asking how many of you like or dislike tattoo’s and the results were 75% of you like them and 25% of you don’t, I totally respect the people who don’t like tattoo’s because I know they can be quite controversial I also asked how many of you actually have tattoos which was really interesting to see and 67% of you out of 100% said that you don’t have a tattoo which was quite shocking because I thought way more people had tattoo’s.

So, I think it would only be right to start off talking about the process of finding the perfect tattoo and the meaning behind it etc. So, I’ve been searching for this tattoo for roughly 3 years and I found this one and I’ve wanted my tattoo for around 2 years but I was way too nervous to go and get it as soon as I turned 18 but I wasn’t in the right frame of mind at the time and I’m so glad I waited to be in a better and happier way, now I have really good memories when I look at the tattoo. I contemplated different tattoo’s for a while but I would always go back to looking at this and I knew from then my heart was set on it. Below is the original image of the tattoo I wanted, it looks so beautiful and I’m so in love with it. 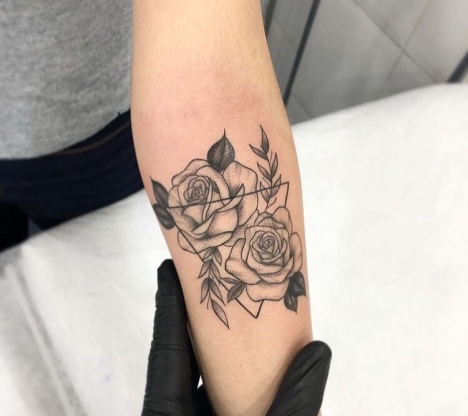 When I’d finally booked up the courage to go and book a tattoo, I had a look around online on the best tattoo places around my area and the best one with 5 stars was the old tattoo emporium in Wolverhampton and I would 10 out of 10 recommend to anyone around the area, I will talk about the experience further later in this post. I went into the tattoo place a week before getting the tattoo and they told me that it would cost me £60 in total which I thought was amazing especially for the price. I spent the week being really nervous and excited and trying to prepare myself for the tattoo. On the Tuesday (the day I had it) my appointment was at 11 so I had no time to be stressed etc.

Now onto the experience, when I got their, they were so so lovely and could tell I was very anxious about getting the tattoo and they made me feel a lot better and they told me I was going to be okay. When getting the tattoo, they made a template of the tattoo and put it on my arm just so I could see the size on my arm. Now coming to the pain, I would say the pain out of ten would probably be a 7 especially on the outline, It was definitely way different to what I expected and it was definitely painful but it was 100% worth it. The shading wasn’t as bad as the pain of the outline and I quite enjoyed watching the shading which made the tattoo complete. When they first started the tattoo, I became really dizzy and faint and they made me feel so much better, they let me have some time to calm down and they also put a fan on me which really helped and they would reassure me that I could take the time I needed which I really loved. Once they had finished the tattoo, they put some cling film on it which is normal and they also gave me an after care sheet which I found so helpful because I wouldn’t have had a clue of what to do if they hadn’t have gave me it. They also advised me to get some cream which was called Bepanthen which has helped so much with my tattoo and to calm it down (I’ve had the tattoo for a day at this point) When I got out of the tattoo place, the tattoo hurt the most it probably would, it ached so much and I just wanted to go home but after an hour, it calmed down and almost felt like there was no more pain. Below are the image of the tattoo as soon as I got out of the tattoo place.

As you may be able to tell, it is quite different to the image of the tattoo which this is based from which I actually really like because it makes it different and it gave it more of a meaning. So now I guess your wondering what the meaning is behind my tattoo, I’ve always liked the thought of getting a tattoo and it having a meaning, I’d love to get some random tattoo’s but I definitely wanted my first tattoo to have a meaning. So, I’ve always loved roses and I have for the longest time and it symbolises growth and happiness and new beginnings, recently I’ve tried putting some things from my past behind me and its only recently I’ve been able to do that which is why I thought it would be the perfect time to get my tattoo because I won’t have a negative view on the tattoo in the future. Below is an image of the tattoo after 4 hours of having the tattoo and I’m absolutely in love. That is the end to the whole process of my tattoo, I’ll be updating you on the recovery and how long it took to heal etc over on my Twitter so head over there to have a look! Thank you for reading, until next time x my socials are below so if you’d like to see more from me, head over there!

Also, Follow each of my social medias for more from me:

Hey, Welcome to Chlo Lauren, thank you for visiting my blog, so, let me introduce myself, I’m Chloe who is currently 20 years old who has the aspiration to present all of my interests to others. Apart from writing the occasional blog post, I am currently studying my second year of Forensic Psychology at university and I take photos for Instagram. Chlo Lauren will be a place where I express my love for; Beauty, Fashion, Lifestyle and Travel. If you would like to get in contact with me for collaborations and PR, please email me at chlolauren@yahoo.com. View more posts

9 thoughts on “My experience of getting a tattoo”

This site uses Akismet to reduce spam. Learn how your comment data is processed.