Something that I’ve been really excited about showing you is my updated room tour for my second year accommodation, it definitely took some work, it was almost unbearable to live in as we’ve had some real issues with this house but after putting in the work and time, I’ve made it almost feel like home and I’m so happy with it, there are definitely things I want to add so it’s definitely not complete but it’s almost there, I want to add some more prints to my wall because it looks quite bare but apart from that, I’m in love with it.

To start off with, I’m going to show you the centre of attention, the bed, for the first time ever, I have a double bed and I’m so excited about it, I’ve always had a single bed growing up so it’s definitely nice to have some room. I decided to go quite neutral and as minimalist as I could minus to overly amount off things I own. I got this bedding online and its so cute, I also got the two cushions from Asda which were on sale for only £3 each which was an absolute bargain and I’m obsessed with them, I got the mustard coloured cushion from Primark last Christmas which goes so nice with my throw. I am obsessed with my bed which is important as I practically spend most of my time in it.

Above my bed I’ve just got the two prints which I got from IKEA which I love and they really add something to my room, I can’t believe they were only £5 for the two. 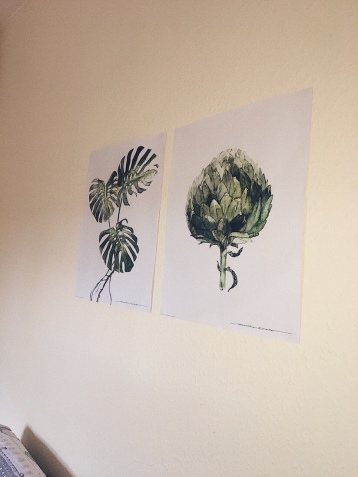 Next to my bed I have this small side cabinet which is so handy for putting the small things that have no other home, here I’ve just put all my books which I still need to read some of them and I have my skincare and it all looks so cute on here. In the draw I just keep all the random crap which I may need some time in the future such as my passport and some bits from Sephora. 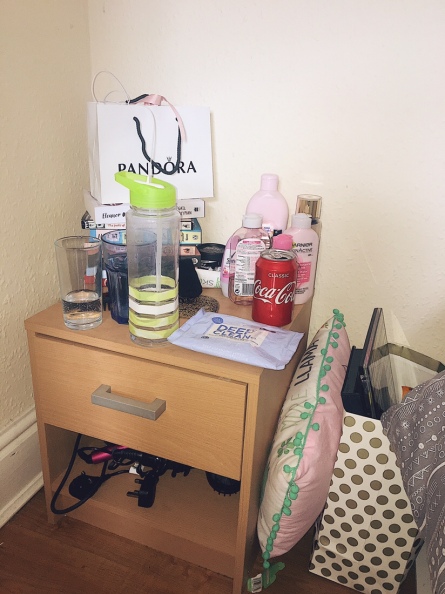 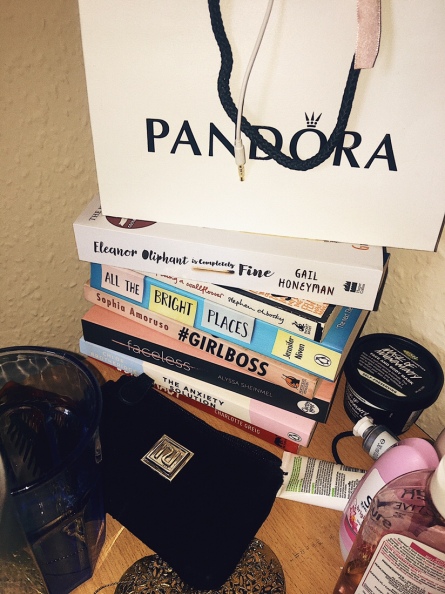 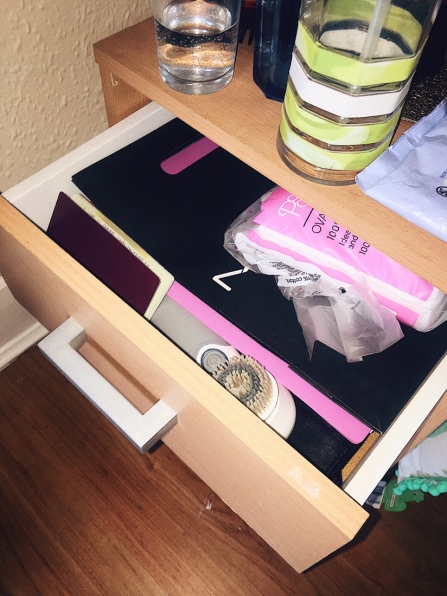 Next to my bed which I really didn’t expect to have in my room is a fire place which I love, I love how different it makes my room like and even though it’s quite simple, it adds that bit extra to my room. On the shelf I’ve just put my cactus’s that I got from IKEA, my buddha and my Chloe purfume and I love how it looks. Above it I’ve just added some of the photo’s from my trip to Rome which I love. 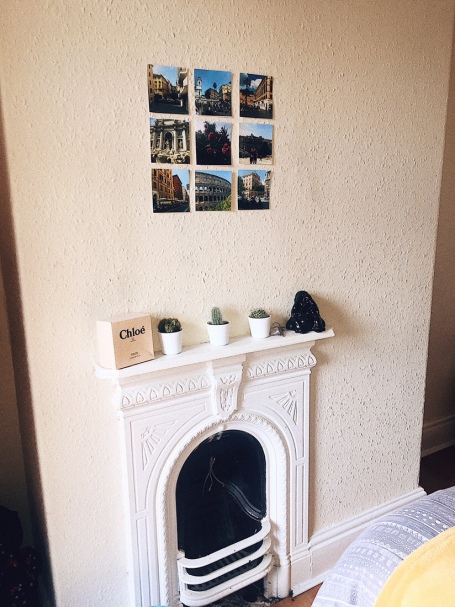 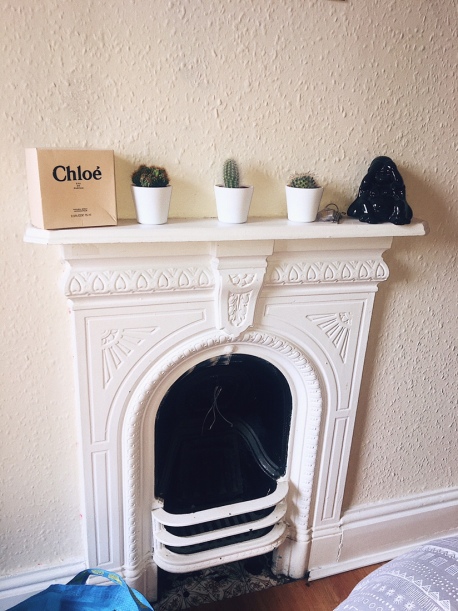 Next to that I just have my wardrobe which has obviously just got all my clothes in and I have my clothes dryer up the side as that was the only place it would go and wasn’t in the way, there isn’t much to this part in my room as I haven’t really decorated it much.

Next along I just have my window which is massive which I actually love because I have this weird love for massive window’s and it really opens up the room. Along the bottom I just have my two plants, a candle of course and my two pop vinyls, I really want to collect some more but I have no idea where to get them cheap.

Along from my window I just have my full length mirror which has came in so handy when looking to see if my outfit looks okay and next to that I just have a desk which is broken but I’m planning on getting another, I just have some random junk on there such as my stationary for uni, literally a pad and some pens and my picture from I got from my boyfriend last year, at the bottom of the desk, I have two trays which have all the random crap such as other notepads etc.

Now to the last but one of my favourite things in my room, my clothes rail, I just love how this looks in my room, I’ve added all my Autumn statement pieces on it and I just can’t stop looking at it, it goes so well with the theme of the room, the rail was also such a bargain, I got it from IKEA obviously for only £8. Below this I just have my rug which I love, this was from B&M and it was so cheap, I think it was only £6. 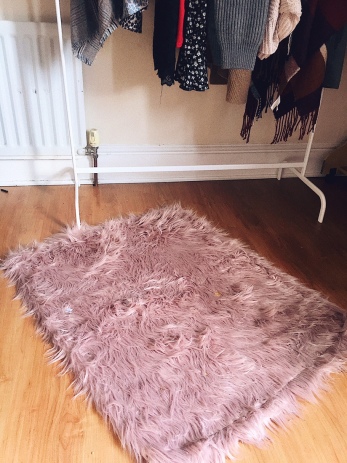 That is the end of my room tour, I hope you enjoyed having a nosey around my room, thank you for reading.

Also, Follow each of my social medias for more from me:

Hey, Welcome to Chlo Lauren, thank you for visiting my blog, so, let me introduce myself, I’m Chloe who is currently 20 years old who has the aspiration to present all of my interests to others. Apart from writing the occasional blog post, I am currently studying my second year of Forensic Psychology at university and I take photos for Instagram. Chlo Lauren will be a place where I express my love for; Beauty, Fashion, Lifestyle and Travel. If you would like to get in contact with me for collaborations and PR, please email me at chlolauren@yahoo.com. View more posts

This site uses Akismet to reduce spam. Learn how your comment data is processed.